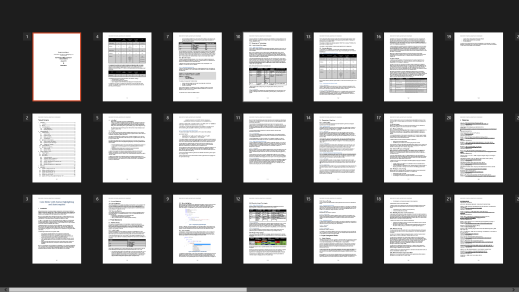 The Interim Report is quite big, this is just under half of it

As part of the process of completing the final year project you have to submit two, smaller iterative, reports before your final report. These are a great opportunity to get in-depth feedback on your work before submitting your final report — they’re also a good way to evaluate your progress.

The initial report — which is produced early on in the project, in September — outlined the introduction and context of the project, for me this consisted of explaining what PHP is, what an integrated development environment (IDE) is and then discussing what other PHP IDE solutions are on the market today.

Initial ideas of what technologies and methodologies would be used for the project were also briefly discussed based on research I did over the summer, which had to be referenced in Harvard style.

Perhaps most importantly the initial report was the time when my project title, aims and objectives were set in stone for the first time. A time plan and associated gantt chart were produced to outline which work should be taking place at which time in order to deliver a finished product by the due date for the report.

The initial report was marked by Professor Ping Jiang and he awarded me a mark of 72%, which I was pretty happy with for my first mark of the third year. 🙂

Yesterday I got back my mark for my Interim Report. The Interim Report is used to detail your progress since the initial report, and is submitted in January, about half way through your development time.

All the reports are iterative, in other words based off of the previous one. So I added in more detail about which methodologies I have been using to develop my project, updated my time plan to be more realistic and discussed the risks and ethical issues associated with the production of my IDE.

Dr. Martin Walker marked this report and I’m very happy to say that I got 85%. This gives me a good base on which to produce a good final project, especially with the in-depth feedback I received.

I will of course keep the blog updated with future developments on the final year project.