“All In” on The Cloud

I got back to Hull yesterday morning, having left Dunstable at 5:30am, moved into my new house — which is spacious, well furnished and an all round upgrade from last years dingy old thing — and so today I had my first day back in the Forward Thinker Developments office. Over the summer I had been working from my new dual screen rig at home. 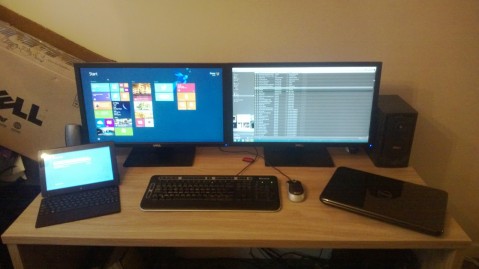 My “Battlestation” — When you get a document up on that baby, you are seriously looking at that document

I spent the vast majority of the day working on my Tablet, which was already set up with the correct FTP details, Git repositories and had all of the programs I wanted and needed on it, however when — towards the end of the day — my tablet finally ran out of juice I had to work on a PC which had an internet connection, but to which I had no administrative privileges.

This meant I was unable to install any of the programs I wanted and needed to do the work I needed to do; writing PHP script, committing changes to my Private GitHub repo and keeping in contact with the rest of the team, nor install the applications I like to have open whilst I work; such as Spotify for music.

The Cloud to the rescue.

I soon discovered that a little while back GitHub released a reasonably full-featured code editor to their website which you could use to make quick edits to files and then immediately commit them to the repository, it even included some syntax highlighting and simple auto-complete,, you can see this in the image at the top of this post. That meant that both writing my code and adding it to source-control was taken care of. I then found that you can make Skype calls, including Video and Voice messages from outlook.com, and, whilst this is still in beta, it seemed to work really well — this covered my communication with my team mates.

At this point I could work well, and get on with what I need to do, but something was missing, something very important indeed — perhaps the most important piece of software on any computer. A music player. I simply loaded up play.spotify.com and within seconds, after logging in with Facebook, was enjoying a bit of Frank Sinatra. Great programming music.

Whilst it is clearly preferable to have a fully featured IDE and source control client on your PC, when required these solutions do very well, and I wouldn’t be surprised if it wasn’t long before the web app counterparts to many traditional client side programs, such as Office, Visual Studio and iTunes are actually better and replace their client side versions. Perhaps, even today’s third year computer scientists will be involved in that and bring computing back to having a mainframe style server system as it did in the past, but on a much larger scale.