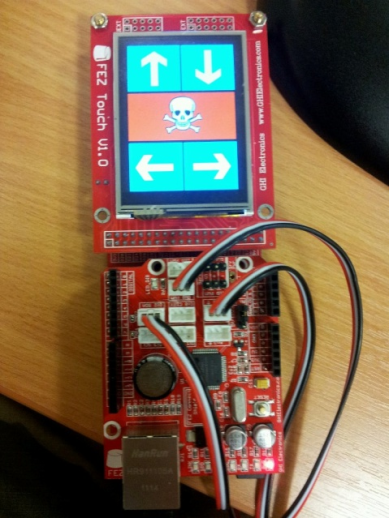 3 of the more exciting terms in Computer Science, it has to be said — and also three of the integral parts of the Electronics and Interfacing module, which I haven’t spoken about much this year. This is due in part to the fact that I spent a lot more time on the other modules I took this year, and partly due to the fact that the coursework and exam for the module were both at the very end of the year.

Infact my final exam for the module was only yesterday, my last for the whole year, meaning I’m now at the end of my second year of university 🙂 Expect a second year round-up blog post soon.

Below you can see the LCD Screen I programmed to show Bitmap images (don’t think anyone else did this) which could be touched to control the devices trajectory or to activate the Killswitch — which stopped the robot dead in its tracks. Next to that you can see the potentiometer which could be used to alter the speed of the robot, and finally alongside this you can see a physical button which also activated the Killswitch, for those times when the responsiveness of a touch screen wasn’t enough and you wanted to smack something! 😛

All of these items when used together were used to control Eric, our robot, whom you can see below.

The exam, which I took yesterday, focused more on the electronics portion of the module, and now the terms Ohm, Amp, Volt, Potential Difference, AC, DC, Current and Resistor and burnt into my memory forever. In addition to the questions about electronics there were a few questions on the .NET Micro Framework, Threading and other embedded programming specific tools.

As it was an electronic exam I have already received my grade and am quite happy to say I achieved 84%, though I was hoping to do a little better.

This means overall I achieved a grade of 77.6% for the module, which is my lowest grade of the year and therefore a little disappointing, but still a reasonably high first so I’m content.