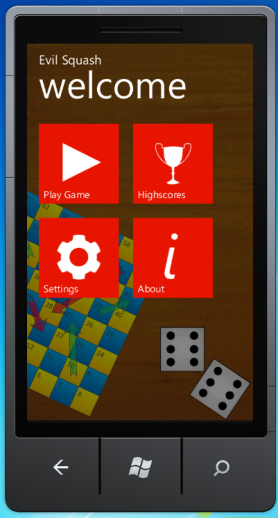 Yesterday I received an email from the people who run the Widows Phone Marketplace telling me that, unfortunately, Sweepy Cleaner had been rejected from the store because under certain circumstances the application exited unexpectedly. I have since fixed the bug and resubmitted the application for testing and hopefully it will be available on the store sometime early next week, of course the blog will be updated when that time comes.

Undeterred by this I have started working on Evil Squash 2. I posted on Facebook that I felt I should have a funny sub-title and suggested “Evil Squash 2 : The Return of Random Rodney”, and in return had several “good” suggestions from my fellow Computer Scientists:

The update is mainly graphical, although I hope to add some new game mechanics as well as the new highscores feature you can see in the above image, the main change is that instead of being a Silverlight Windows Phone 7 application, the type more suited to applications than games, its now an XNA game, which makes doing a lot of the work and graphics easier, meaning its easier to maintain and update in the future.

Expect it to be out in the marketplace soon.